While some products are better than others, all of them—from Tablo to TiVo to HDHomeRun with Plex—have at least one critical weakness. If you want to record broadcast TV channels from an antenna, you must decide which of those weaknesses you’ll tolerate.

The good news is that the lowly antenna is experiencing a rebirth, and we’re likely to see even more over-the-air DVR products. But if you want to start recording broadcast channels now, here’s a rundown of where the current products stand.

Updated January 31, 2020 to add our Sling Media AirTV 2 review. While this device holds some appeal for Sling TV subscribers, its designers haven’t corrected all of the shortcomings we identified in the original device. As such, it doesn’t displace any of our top picks in this category.

The best OTA DVR for most cord-cutters 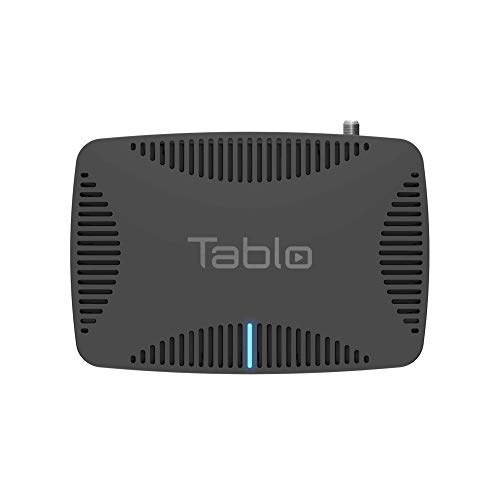 If you don’t need four over-the-air tuners, the Tablo Dual Lite DVR—our previous top pick in this category—remains a compelling value. The Tablo Quad DVR is slightly more expensive, but it makes the fewest trade-offs and of any product in this class. We do have a few nits to pick—interlaced video can’t play back at 60 frames per second, and there’s a limited number of streaming boxes you can use for out-of-home viewing—but in a field that doesn’t include the perfect OTA DVR, the Tablo Quad DVR comes the closest.

There’s a lot to like here, especially for cord-cutters who have made Fire TV devices their media streamers of choice, but there are also enough shortcomings to limit the Fire TV Recast  (which is available in both 75- and 150-hour SKUs) to our runner-up pick in this category.

Plex is the most powerful over-the-air DVR solution you can get, but not the easiest to use.

If setting up a DVR using Plex was more straightforward, it would be our no-reservations top pick. As it stands, installing a Plex-based DVR is a daunting process involving products from at least three other manufacturers (you’ll need a TV tuner; a TV antenna; and a set-top box, NAS box, or personal computer). That mix can lead to difficult-to-troubleshoot problems.

Once you have everything assembled, you’ll have a powerfully extensible system that delivers granular control over the recording and recording-management processes. But one of things you won’t get with a Plex DVR is a grid-based channel guide on most devices. (Plex recently added a guide to its web app and says it’s coming to other platforms, but hasn’t given a timeline.) This in-depth review should help you decide if the trade-offs are worth it.

What to look for in an over-the-air DVR

Evaluating over-the-air DVR solutions is tough, because there are so many factors that can make or break the experience. If you want to investigate further, here are some factors to consider:

Ad-skipping features: Advertising is still a staple of broadcast TV, but some DVRs provide tools to help you skip them. TiVo is the best in this regard, providing an auto-skip button for some programs, and a 30-second skip button for everything else.

Antenna placement options: Over-the-air DVR is useless if your antenna can’t receive channels, so unless you’ve got coaxial cable wired to the roof, you’ll need to set up your DVR in a place with solid indoor antenna reception. Tablo can operate anywhere in the house, HDHomeRun must be wired to your router, and TiVo and Channel Master are tied to your television. Plan accordingly.

Granular recording options: Perhaps you’d like to keep only a certain number of recent episodes, or replace your recordings with higher-resolution versions when available. Not all DVRs are equal in the recording controls they provide. Our full reviews will provide more details.

Live TV time-shifting and catch-up: Want to pause for snack breaks? How about watching partway through a program so you can skip the commercials? Most DVR solutions support this type of time-shifting, but HDHomeRun and Plex currently don’t.

Out-of-home streaming: Tablo and Plex both allow you to watch live and recorded TV from outside the house. TiVo requires a $130 TiVo Stream for mobile device access.

Storage options: With the exception of TiVo Roamio OTA, all the DVRs we reviewed support storage on external hard drives. Tablo has also started beta testing a cloud-based storage service, but we don’t yet know what it’ll cost, and we haven’t tested it yet.

Whole-home support: Unless you only plan to watch on a single television, you’ll want a whole-home system, which means buying a networked tuner (Tablo or HDHomeRun) or setting up extenders (such as TiVo’s $150 Mini units).

Streaming service integration: Many of the DVR products we’ve reviewed are whole-home solutions that you access via apps on your existing streaming devices. In these cases, you can access all your favorite streaming services alongside over-the-air video without having to switch inputs. TiVo is a notable exception. It supports some major streaming services such as Netflix, Amazon Prime, and Hulu, but you’ll still need a separate streaming box to access others, such as Sling TV and Philo.

The over-the-air DVR space should get more competitive over time. If you’re on the fence about today’s solutions, here are some future developments (as of April 2018) to consider:

Tablo LIVE and cloud DVR: Tablo was supposed to launch a $99 networked tuner with cloud DVR capabilities last year, but so far it hasn’t materialized. You’re probably better off with the $140 Tablo Dual Lite anyway, since it can record up to two channels at a time and has a hard drive for local storage.

HDHomeRun Connect Duo+ and DVR improvements: SiliconDust’s own DVR service didn’t fare well in our review earlier this year, but the company says an interface overhaul is on the way. SiliconDust is also working on a new dual-tuner model with a built-in recording engine and 250GB of storage, making it more of a direct competitor to Tablo. The company is targeting mid-2018 for the latter, though it has a history of delaying products that aren’t ship-shape.

AirTV Local Channels DVR: AirTV’s main hook is how it combines over-the-air channels and Sling TV’s streaming cable channels into a single TV guide. Earlier this year, AirTV began testing DVR for over-the-air channels, and all you need to enable it is an external hard drive. As a beta feature, it still has some major limitations—you can’t watch recordings until they’re complete, for instance—but it could become a killer solution for cord-cutters who are tired of switching between apps.

ATSC 3.0: This year, broadcasters are starting to test a new broadcast TV standard called ATSC 3.0 (also known as “Next Gen TV”). The new standard can support 4K HDR video, better surround sound, interactive features, and easier access on phones and tablets. On the downside, ATSC 3.0 won’t work with existing tuners on today’s over-the-air DVR solutions. This isn’t an immediate concern, since any channel that adopts ATSC 3.0 will have to simulcast in the current standard for five years, and so far testing has only begun in Phoenix, Ariz. Over-the-air DVR devices are still worth buying, but be aware that they probably won’t work forever.

Note: When you purchase something after clicking links in our articles, we may earn a small commission. Read our affiliate link policy for more details.
info@mustanhost.com
8.00-20.00