For cord-cutters, there’s nothing on the market quite like AirTV. Although it’s not the only networked TV tuner and over-the-air DVR combo you can buy, it’s the only one that ties into Sling TV, letting you watch local broadcasts and streaming cable channels through a single app.

AirTV now has a new version of the tuner that’s smaller and more attractive, with Wi-Fi 5 for streaming over either a 2.4- or 5GHz network. But while the idea of combining over-the-air and Sling TV is neat as ever, the $100 AirTV 2 tuner corrects hardly any of the original version’s mistakes. Some big limitations on audio and video quality still apply, and the Sling app can still use more ways to integrate over-the-air channels.

If you’re committed to Sling TV for the long haul, you might be able to look past those shortcomings for the sake of having all your TV channels in one place. But those who want to make the most of free over-the-air TV should instead look to other DVR solutions such as Tablo, Channels DVR, or Plex.

This review is part of TechHive’s coverage of the best over-the-air DVRs, where you’ll find reviews of competing products, plus a buyer’s guide to the features you should consider when shopping.

Be aware that the AirTV 2 itself is not a streaming video player, and it does not connect directly to your television. Instead, it hooks up to any over-the-air antenna and streams live TV to other devices, including phones, tablets, most streaming players, and some smart TVs. That way you can set up a single antenna wherever you get the best reception and watch on any TV throughout the house. You can also plug an external USB hard drive into the AirTV 2 and record local channels, effectively turning the device into a whole-home DVR for your antenna. 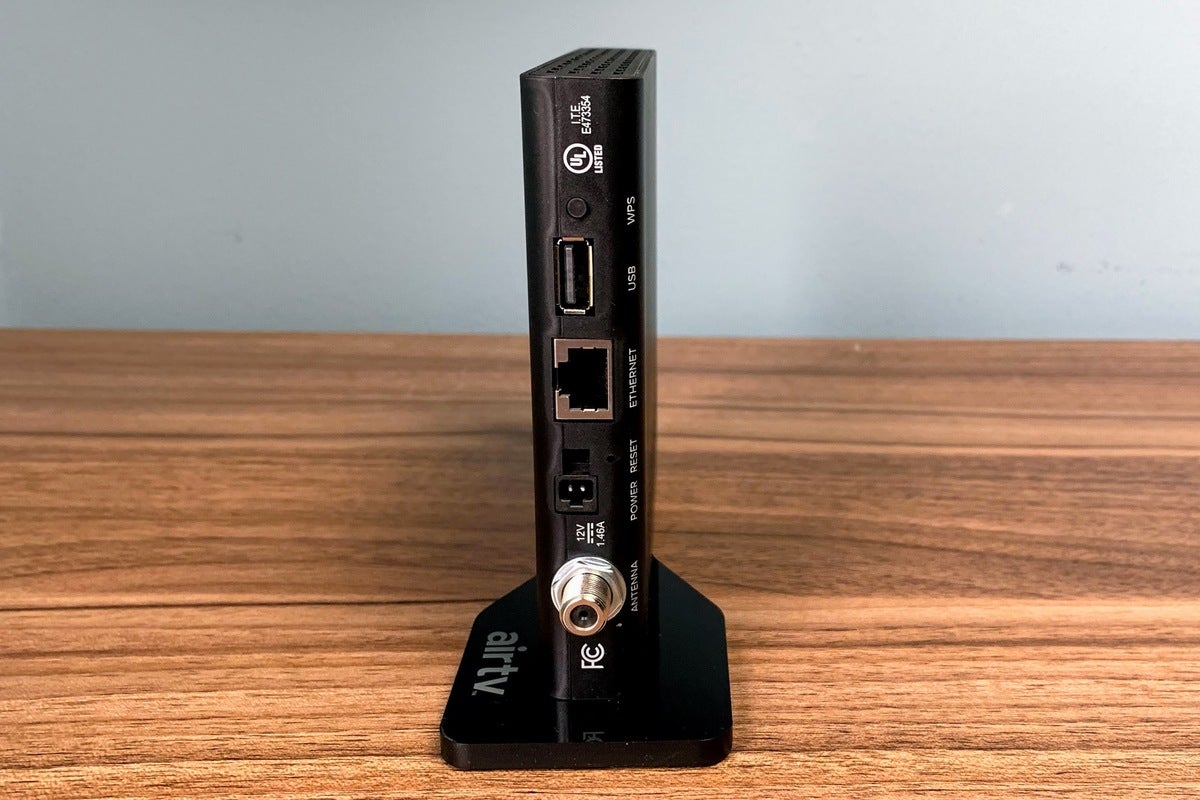 The AirTV tuner has a coaxial input for your antenna, an ethernet port for optional wired network connectivity, and a USB port for recording to an external hard drive.

What makes AirTV unique from other networked tuners is that it streams local channels through the Sling TV app. Although a Sling TV subscription is optional (prices start at $30 per month), adding one  gives you a single menu for both antenna and cable channels.

Once the AirTV 2 is plugged into outlet power with an antenna attached, you can complete the setup through the Sling TV mobile app for iOS or Android. This involves connecting to the AirTV’s Wi-Fi signal in your phone’s network settings, entering your router’s Wi-Fi password back in the Sling TV, and then connecting once more to your home network. (The AirTV also has a 10/100Mbps ethernet port if you have the infrastructure to support a hardwired network connection.) The AirTV will scan for channels based on your zip code and pull in guide data fromo the internet, at which point you can use the Sling TV app on other devices to watch.

Using the Sling TV mobile app, you can connect the AirTV tuner to your home network for streaming local channels.

Unfortunately, AirTV’s over-the-air integration still doesn’t work on all versions of the Sling TV app. You can access local channels through Sling TV on Roku, Amazon Fire TV, iOS, and Android mobile, but not on Apple TV, game consoles, web browsers, or smart TVs from Samsung, LG,or Vizio. (In fact, the original AirTV tuner worked with a separate AirTV app on Apple TV, which wasn’t integrated with Sling, but this app doesn’t work with the AirTV 2.)

As with the original AirTV, the new version still has two TV tuners, so you can watch or record up to two channels at once. You can also watch local channels outside the house on any device that AirTV supports, but only with one stream at a time. 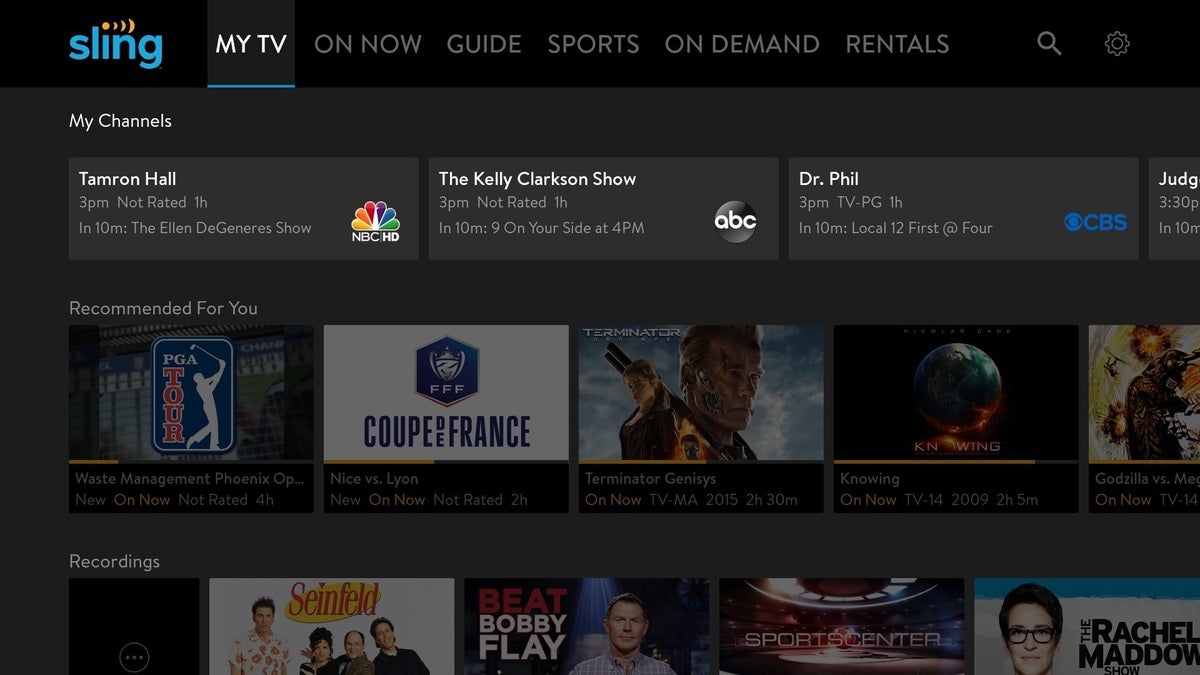 Once installed, AirTV feeds local channels into the Sling TV app on streaming devices (such as the Nvidia Shield TV, pictured here).

The DVR integration does invite a potential point of confusion, though: You cannot record Sling TV channels to your hard drive, nor can you store AirTV’s over-the-air recordings in Sling’s cloud DVR. That means you must manage two different DVR pools, and shows that you’ve recorded from both sources will have separate listings in the DVR menu. 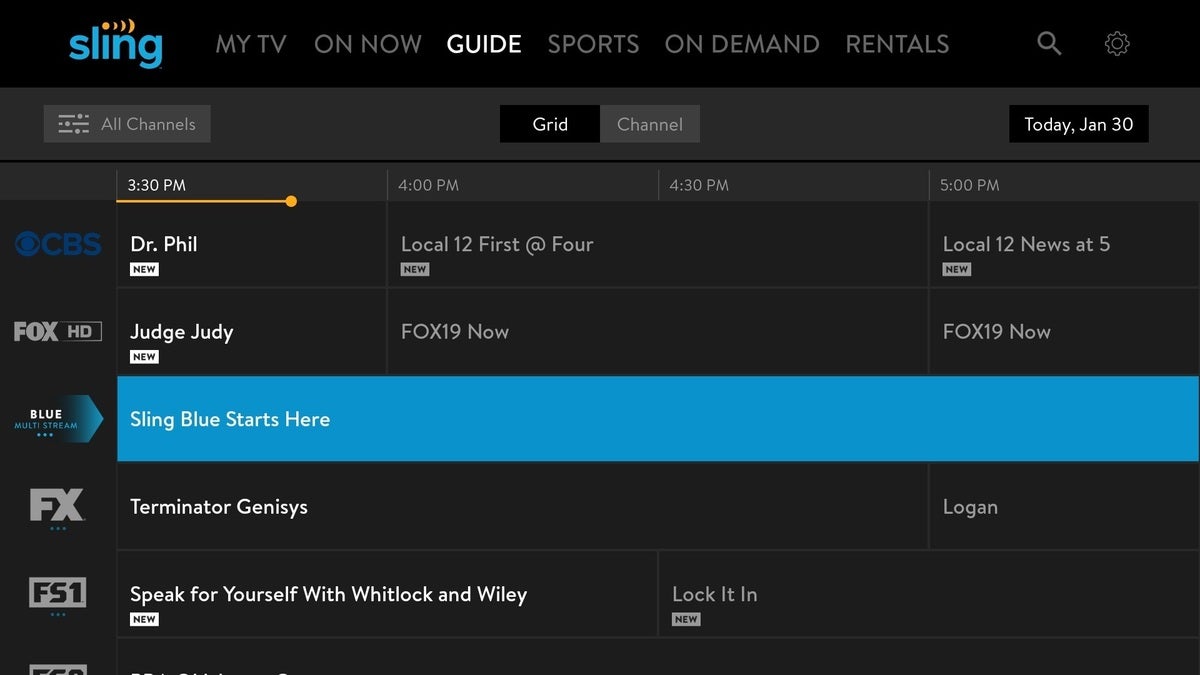 Sling TV’s grid guide integrates with local channels as well, though other parts of the interface don’t.

The Sling app also continues to treat the antenna as a second-class citizen in some areas. Over-the-air programs don’t show up in search results, for instance; instead, you must hunt them down through the grid guide. That content doesn’t appear in Sling’s “Continue Watching,” “Sports,” or “On Now” sections, either.

Limited integration isn’t the only issue AirTV has yet to resolve.

On the DVR side, recording options are still bare bones compared to other over-the-air DVRs. You can limit recordings to individual episodes or new episodes, but you can’t auto-delete older episodes to conserve storage space. AirTV doesn’t support additional buffer times at the beginning and end of recordings either, so you might miss the ending of a show—or a game—if it runs long. 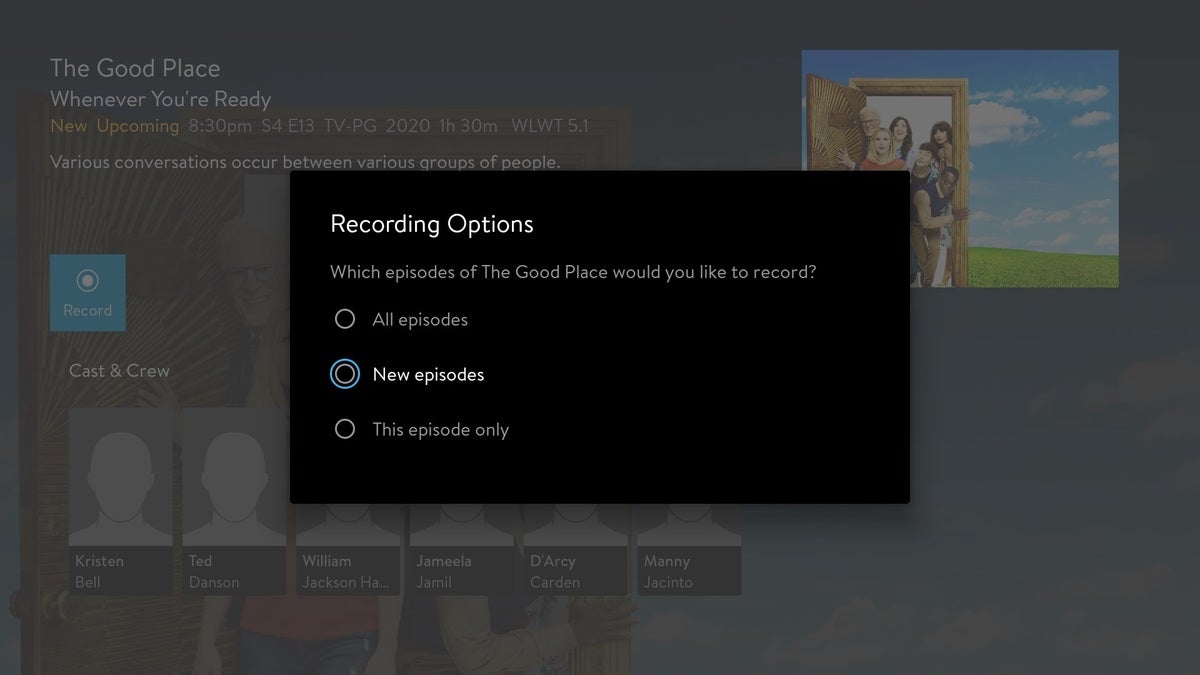 Using a USB hard drive, you can record local channels, though the DVR options are limited.

The viewing experience for DVR is also substandard, with no ad-skipping features and no visual preview when you fast forward or rewind through recordings. AirTV doesn’t even auto-record live programs, so you can’t time-shift live TV without first hitting the record button, backing out to Sling’s menu, then re-launching the still-in-progress recording.

As for video quality, AirTV continues to top out at 30 frames per second for all over-the-air channels, which means live sports, news, and talk shows will look choppier than direct antenna output. And just like the original AirTV, the new version doesn’t support surround sound. 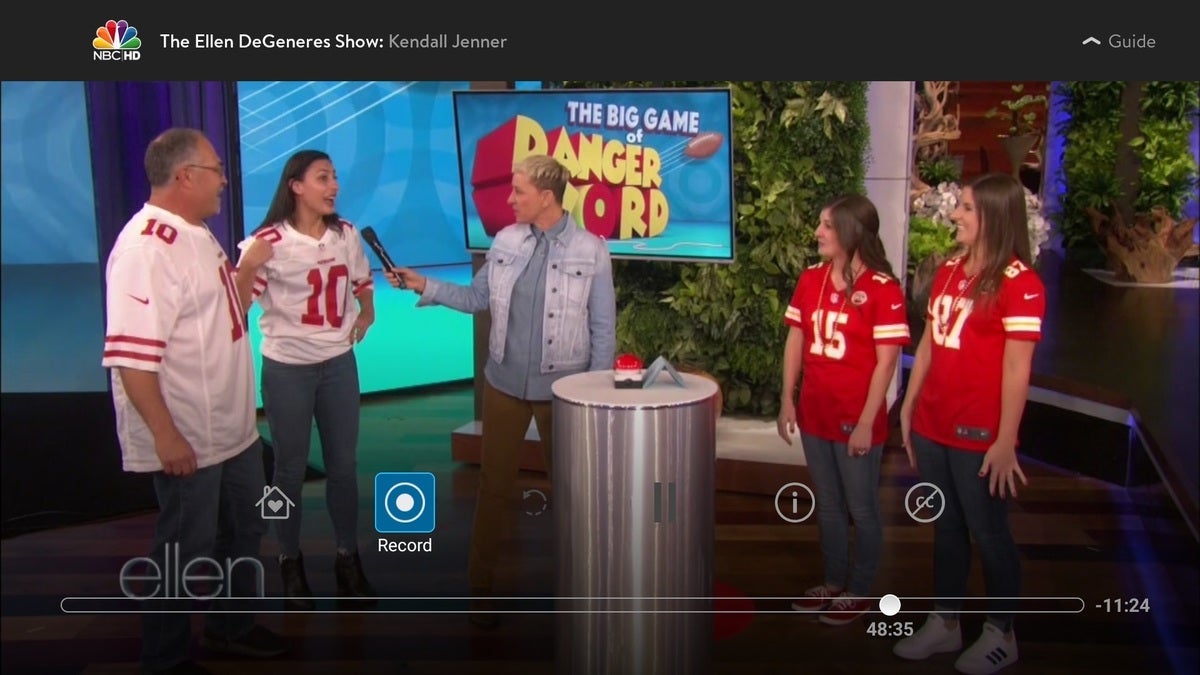 While watching live TV, the pause button doesn’t work for local channels unless you create a recording first.

Despite those issues, AirTV 2 has a couple of saving graces.

The first is cost as a pure over-the-air TV solution. At $100 for the hardware, AirTV 2 is one of the least expensive ways to capture live TV from an antenna and distribute the video to multiple televisions around the house. Connect a USB hard drive (you can a 1TB model for less than $50) and the AirTV 2 becomes a whole-home DVR that’s less expensive than the likes of Tablo, Plex, Fire TV Recast, and Channels DVR, especially because AirTV has no subscription fees.

Adding Sling TV channels makes this setup even better, and with a starting price of $30 per month, you could end up spending a lot less compared to live TV services that include local channels. (YouTube TV, for instance, costs $50 per month, and Hulu with Live TV and Fubo TV both start at $55 per month. AT&T TV Now is even pricier at $65 per month.)

Still, you’ll have to think long and hard about whether AirTV’s limited video and audio quality, patchy Sling integration, and bare-bones DVR features are worth that extra savings. As with everything else in the world of cord-cutting, it’s a matter of trade-offs.

Note: When you purchase something after clicking links in our articles, we may earn a small commission. Read our affiliate link policy for more details.
info@mustanhost.com
8.00-20.00